The air was crisp and dry as a new dawn befell Coolangatta Airport. At 8:00AM, following a coffee and toasted ham & cheese sandwich breakfast, James and I boarded the Jetstar flight out of the Gold Coast and headed to beautiful Japan. Although our flight schedule was altered and we were required to transit in Cairns for three whole hours, it was still an adventure to behold. This is the second time we’ve travelled together on our own. We were excited to do it again. I’d never been to Japan before and I wasn’t sure what to expect from this trip.

After 9 solid hours of flying, we finally arrived at Narita International Airport tired and jaded, but excited! Yokohama was our first destination, so we took the YCAT (Yokohama City Air Terminal) bus to the city. Fun fact: Yokohama is the second biggest city in Japan. The YCAT cost us 2,000 yen each, which is fairly expensive now that I think about it.

An hour and a bit later, we found ourselves in Yokohama. Because we were staying with James’ uncle and aunt, we technically had free accommodation. It was very nice of them to put us up in Yokohama! Martin and Akiko had a lovely apartment 2 seconds away from Chinatown. Another fun fact: Yokohama’s Chinatown is the biggest Chinatown in Japan and one of the biggest in the world. I’d like to vouch for that. Honestly, it’s pretty darn awesome.

It was past 10:00PM by the time we got to their place and we were quite worn from travelling, so we showered and went to bed. But we were up early the next morning, ready to do some exploring of this foreign land!

Unfortunately, we woke up to grey skies and relentless drizzle. The light rain was featherlike; a soft sheen of mist and spray that floated down and down and down from the cloud-studded sky. That didn’t dampen our spirits! Akiko and Martin brought us to Southern Chiba, which was a train ride, a bus ride and a 45-minute ferry ride away from Yokohama. Chiba is located on the other side of the peninsular, across Tokyo Bay.

Our plan was to hike Nokogiri-yama (“Sawtooth Mountain”), a mountainous area littered with over a thousand little tokai arhats (carved statues of spiritual practitioners). We were going to visit the Daibutsu (“giant Buddha”), which is the largest stone statue of Buddha in Japan.

In hindsight, Nokogiri-yama, being a nice quiet little countryside hiking spot that’s tucked away out of sight from rabid tourists that hound busy areas like Tokyo, was perhaps a great starting point of our week and a half long adventure in Japan. The views were amazing, despite the heavy blanket of clouds and mist and rain that drenched us throughout our hike. Apparently, on a clear day, you may be able to spot Tokyo and even Mt. Fuji from the top of Nokogiri-yama. All we really saw was the coastline through the fog, but it was still pretty. The nature was everywhere, untouched, beautiful. And when you take the ropeway cable car up/down the mountain, you are greeted with a spectacular view of the tops of the millions of multi-coloured trees that cover the mountain.

The hike was punctuated mostly with sets of stone steps. Wearily clutching our umbrellas, we seemed to climb up and down a never-ending winding path full of steps and statues… Hundreds and hundreds of statues! 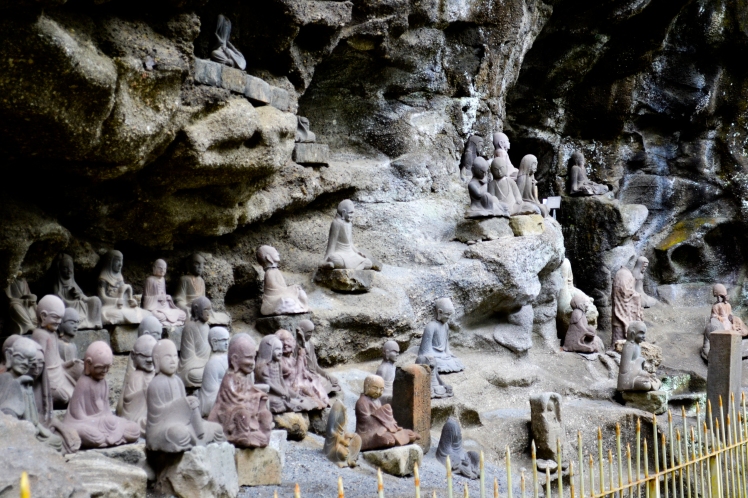 Until finally! We arrived at the giant Buddha statue. And yes, it was huge! 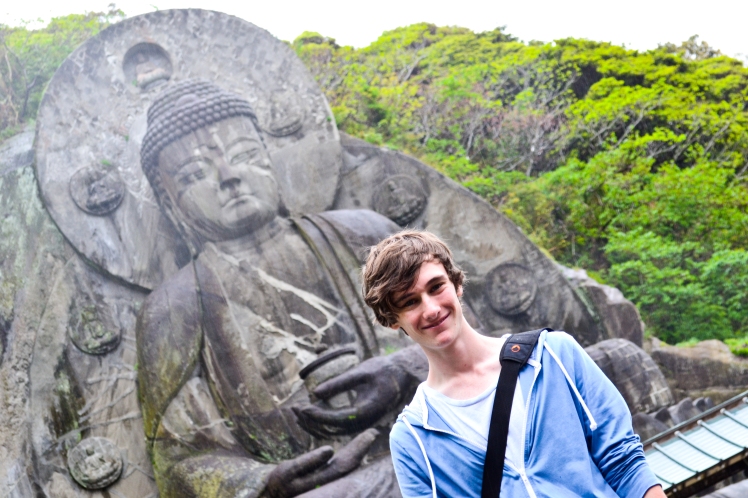 After taking several snapshots of the stone figure, we went over to the little gift shop to draw our fortunes from a little box full of lucky charms folded in paper. 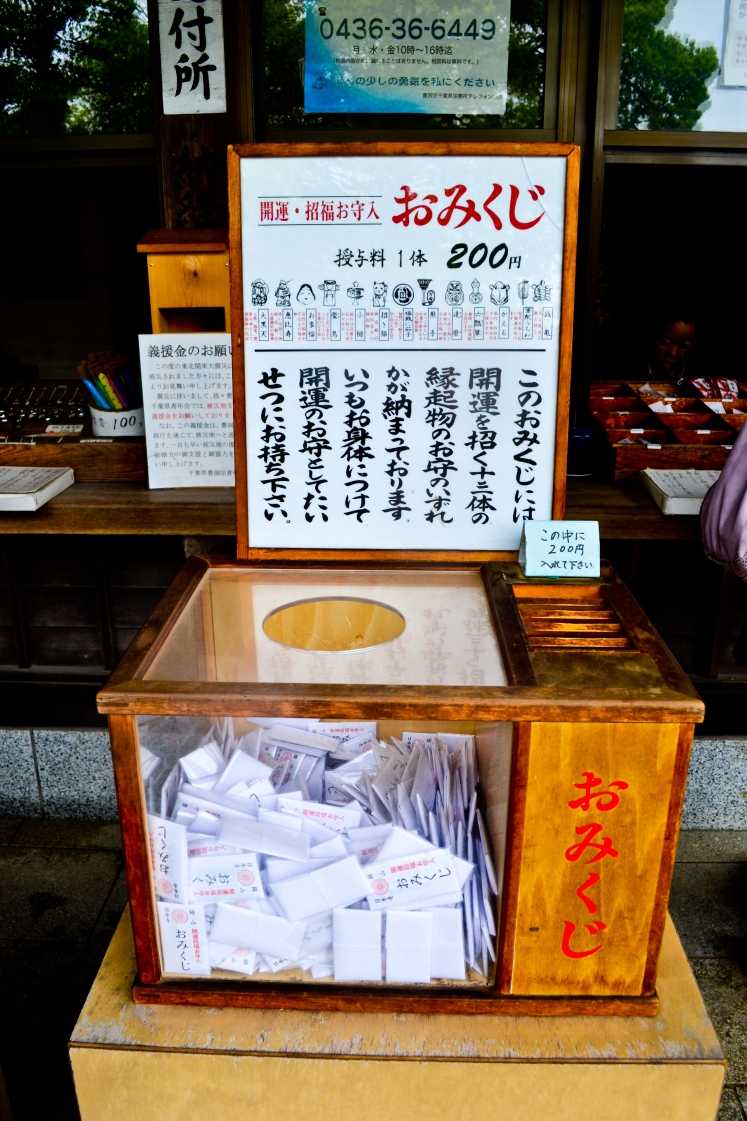 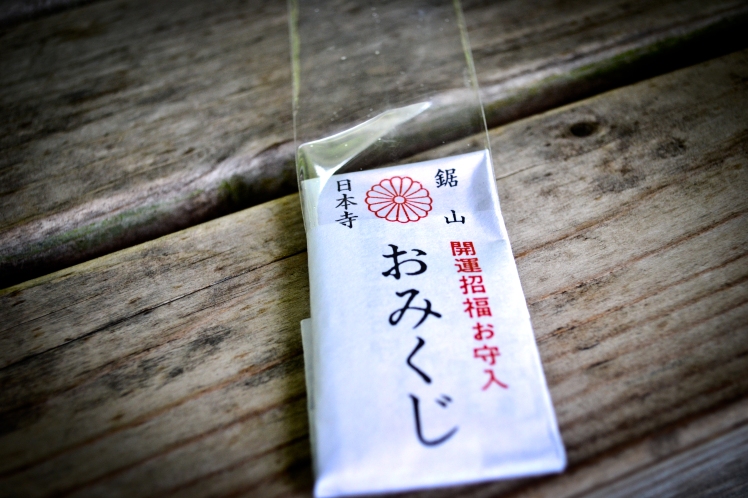 The hike back nearly killed me. My thighs felt like jelly when we finally completed the climb back to the ropeway station! Yeah, I’m not really what you’d call ‘fit’. But overall, it was a very interesting trip and an experience that I won’t soon forget! 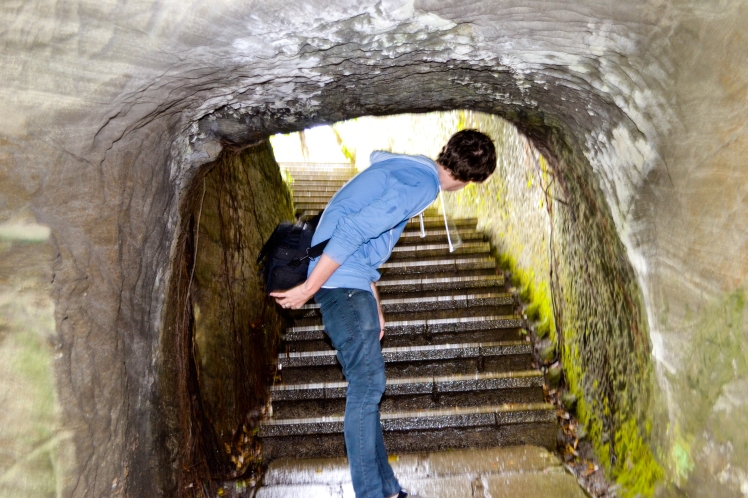 Lunch was had at The Fish, a nice waterfront restaurant that served a wide array of fresh fish and other assorted dishes ranging from Japanese to Western cuisine. Here are some pictures of the food we ordered. 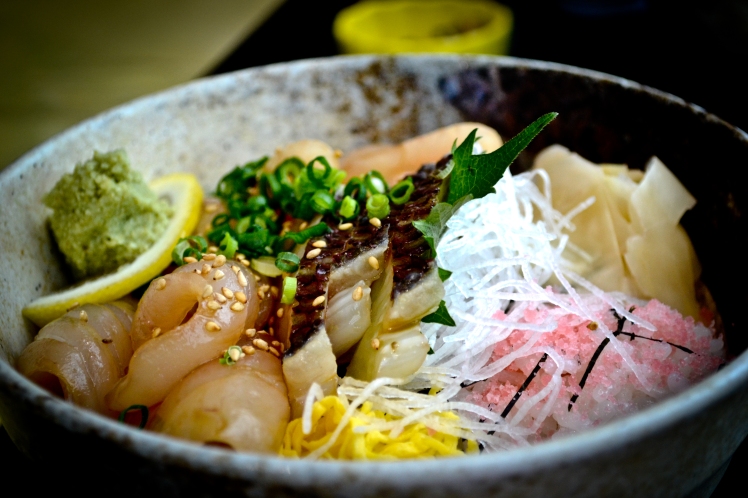 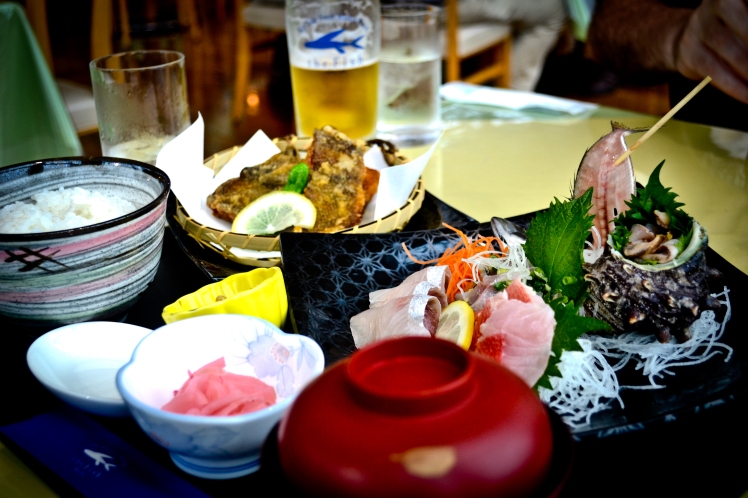 After lunch, we had a quick look at the shop near the restaurant. We were assaulted by a colourful myriad of food products from dried seaweed, dried fish, live shellfish, packaged snacks, snack samples, and a mountain of other assorted goodies including shiny beads and cute stationery.

We headed back to Yokohama after and made a quick stop at Minatomirai Station, which led us to Minato Mirai 21 and the Queens Square Towers. After a quick walk around the shopping complex, we headed back to the apartment and had a light dinner consisting of oden (a Japanese winter dish containing ingredients such as boiled eggs, daikon radish and fish cakes cooked in a soy-flavoured dashi broth), and a green tea cake roll filled with cream. They were purchased at a convenience store. Honestly, convenience stores in Japan sell everything. How convenient. We even got some inari sushi and onigiri but were too full to consume those.

And that, my friends, was how we spent our first full day in Japan. More to come!

8 thoughts on “Excerpts from Japan: Rain Over Sawtooth Mountain”